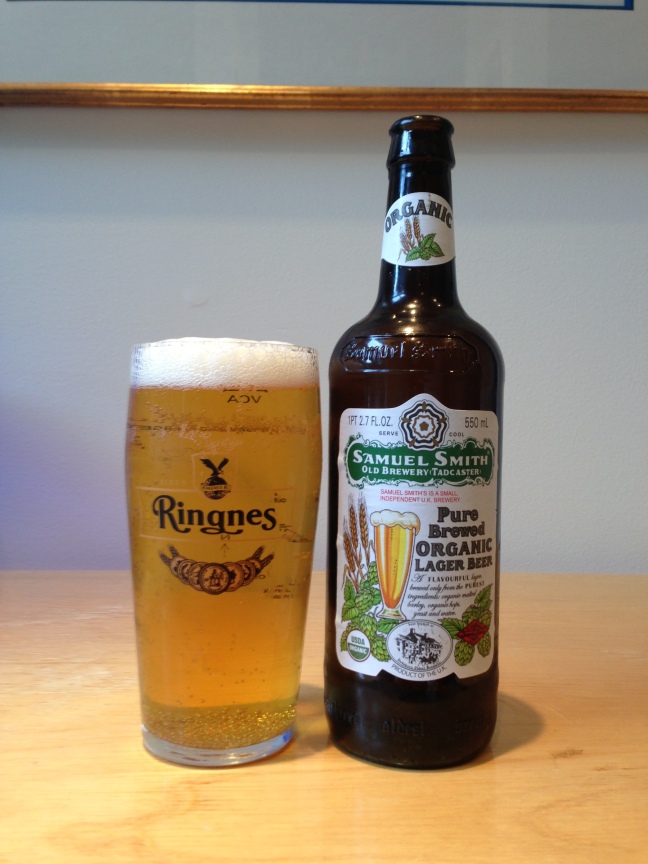 When it comes to craft beer the word Lager is looked on as a bad or dirty word. That can be so done to BMC (Bud Miller Coors) for brewing such bad or weak tasting beers. But I don’t think that lager is such a foul word. I have had some great lagers and this Samuel Smith Pure Brewed Organic Lager, 5.0% ABV, is what a BMC/lager beer should taste like. Samuel Smith an English brewery has some of the best beers in the world. This lager is no different. Samuel Smith Lager pours a bright golden color with a pure white foamy head that says for a nice while and makes very nice lacing. There are tons of light streaming through the glass with tons of little carbonation bubbles. This is a beautiful look lager beer. The aroma on this English lager is bready from the malted barley used. I also found a cracker-like scent among the bready aroma. The taste is not far off from the nice aroma; I found it bready upfront and a little teeny sweetness toward the end. The flavors on this lager are crisp, sharp, light, and refreshing. The mouthfeel is light and refreshing and has a clean crisp bready like finish. The after taste is a tad bit sweeter than the start but fades out rather quick. I think this is Samuel Smith Pure Brewed Organic Lager is how a BMC should taste. Forget adding SO much water to the darn lager. This Samuel Smith beer is getting A+ from me. This is an excellently brewed lager and a great example of how lager is supposed to be. I have yet to have a bad Samuel Smith beer! All of the beers that they brew are just as excellent as the last. This Organic Lager is something I would have over and over again, and it’s good that it is 5.0% ABV. I highly recommend trying this lager, so go and see how great this beer is! Cheers Please enjoy responsibly!