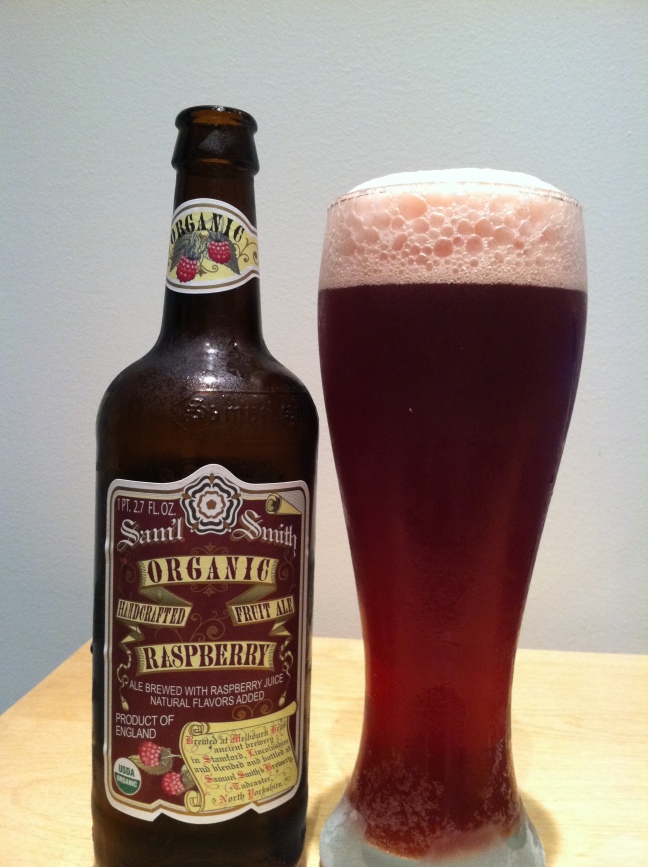 When you think of England and its beer you think of a pint of bitter, but yes this is English Ale but it is brewed with Raspberry juice, and other natural flavors. They do brew ale with other fruit. This brewery, Malbourn Bros’ is in Stamford Lincolnshire and its blended and bottled at Samuel Smith’s brewery in Tadcaster North Yorkshire. This beer is organic. This Ale is 5,10% ABV. This ale pours a dark reddish-purple color with a thick violet white head that is most appealing. Yes, this has a strong raspberry scent leaning on the flowery side, but all over it’s a great scent. When you take the first sip it has a huge raspberry taste that is very good, and very pleasing. This is not as bubbly as a lambic. This aftertaste has that slight tart yet sweet raspberry to it. This whole ale has that big raspberry taste. But yes this beer has that good English ale taste behind that massive wall of fresh tasty raspberry. I could see this being a springtime drink in a local English pub, outside looking out at the rolling English countryside. But be careful with this, it is so good and sweet you will not want to put it down and just chug it. This is a refreshing beer, but not a girly beer. It’s a bloody brilliant pint, they say in England. So try this fruity ale and you will be pleasantly surprised. Cheers! Please drink responsibly!