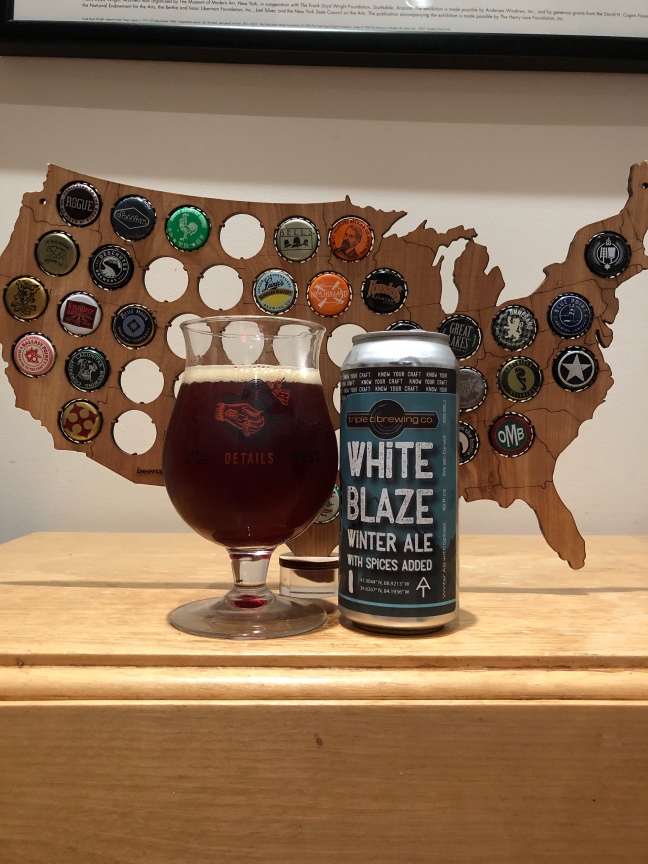 Triple C Brewing Co. White Blaze Winter Ale With Spiced Added, 6.0% ABV, a winter warmer, brewed right here in Charlotte, North Carolina that was picked up at my local grocery store is a winter seasonal beer. White Blaze pours a deep amber almost brown color with a light beige one and a half finger head that slowly dissipates into little bits of lacing that give off sweet almost cinnamon spice aromas with a very light boozy note that pulls you into a sweet flavor at first followed by a cinnamon spice note that is reminiscent of a cookie that does get a bit strong but otherwise enjoyable with a nice sweetly spiced finish and a sweet spiced boozy aftertaste with a more full mouthfeel. Triple C Brewing Co. White Blaze Winter Ale With Spiced Added which I think is cinnamon is definitely a winter beer and isn’t overwhelming on your taste bud but think that two pints of White Blaze beer is enough for your taste buds, but it’s a B+ beer and has the right amount of spice, some have to much wintery spices and it just doesn’t go well. But this Triple C Brewing Co. White Blaze Winter Ale With Spiced Added is great and I do recommend it! Cheers! Please enjoy responsibly