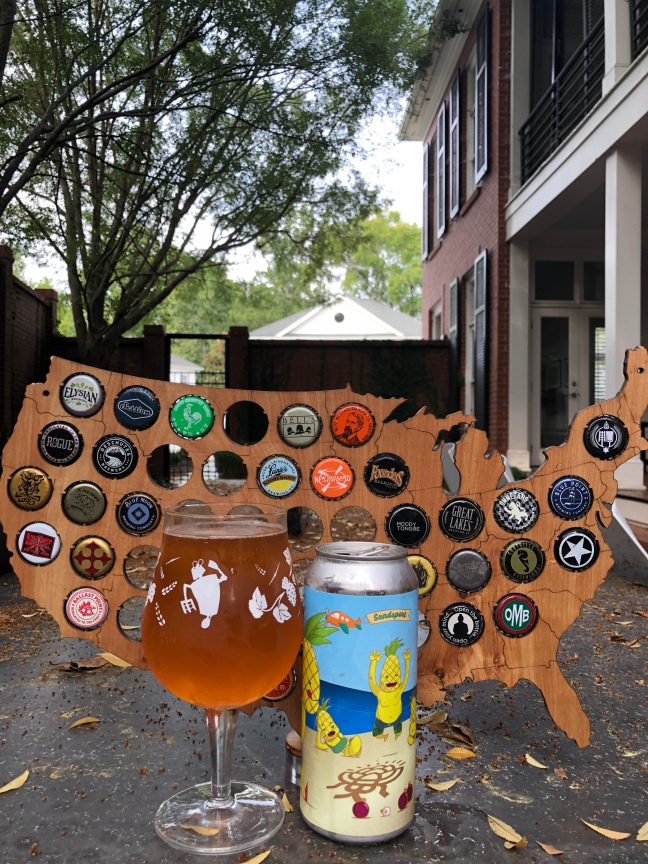 This sour fruit beer, Hopfly Brewing Company Sandsport, 5.4% ABV is brewed with pineapples according to the pineapple people family playing on the beach depicted on the label. I am not a huge fan of the sour style of beer, I find it to be okay, and some are better than others but is it, not my favorite style. Sandsport pours a deeper orange color with a quickly fading two white head with no trace of it left behind. It gives off a sour fruity aroma with tart pineapple with a few faint wine-like aroma wafting into your nose. Now it tastes sourer than it smells but there is a nice sour/tart pineapple note that as it fades it kicks up another sour notch with a very faint wine-like quality with a sour finish that is a little tart with some pineapple and flows into a tart and sour tropical aftertaste that fades rather quickly with a light mouthfeel. Sometimes pineapples can be sour at very least even without souring them and I found Hopfly Brewing Company Sandsport to average so think its a C. It’s not bad just that I don’t think you should sour pineapples or not sour them as much so that some of the sweetness can come through a little. Hopfly Brewing Company Sandsport isn’t that bad and I may go back to this somewhat soon. Cheers Please enjoy responsibly!