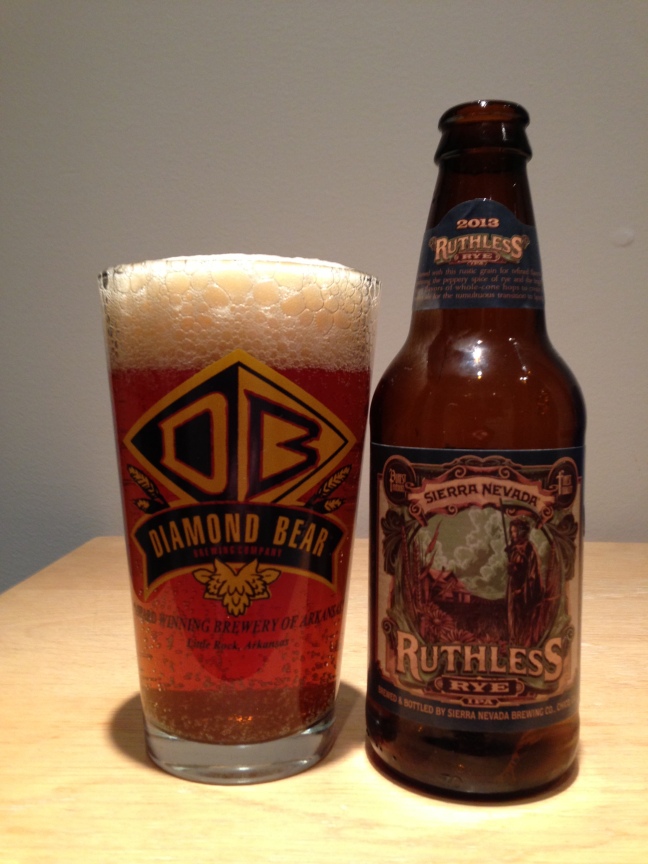 There is a wide range of ingredients when it comes to brewing beer, but some brewers and beer drinkers overlook some. One, in particular, is rye a grain closely related to wheat but tends to be a bit dark in color. There are a few breweries that use rye. Here is one example of a rye beer. This is Sierra Nevada Ruthless Rye 2013 6.6% ABV, which is a west coast style IPA with rye. Ruthless Rye is a seasonal release, and Sierra Nevada Brewing says it fits in between winter and spring, that transition between the two. Ruthless Rye pours darker than most IPAs. It pours a deeper amber/copper color with a three finger white bubbly head. This beer does have some lacing to the glass. I found some light coming through the class with a very little amount of carbonation bubbles. The aroma is just like a west coast IPA, with a citrusy scent of grapefruit, and a hint of the orange peel. The taste of Ruthless Rye has a nice amount of hop bitterness up front with nice grapefruit flavor that is followed by a hit of a small peppery spice. There is also a very faint malt character to it. The mouthfeel is light and this beer does finish well with a citrusy grapefruit aftertaste. The aftertaste does say for a little and the fade before your next sip. Well, I like this one because of the rye in it, but it doesn’t WOW me. So I am giving this a B. This is a good effort from the folks the Sierra Nevada. I mean they do hoppy beers well. They were the first breweries to brew pale ale here in the U.S. It’s good too. But anyway, this Ruthless Rye is worth a try, and I would recommend this to any IPA or rye fan. I would have this again. It is a good solid beer. Cheers! Please enjoy responsibly!