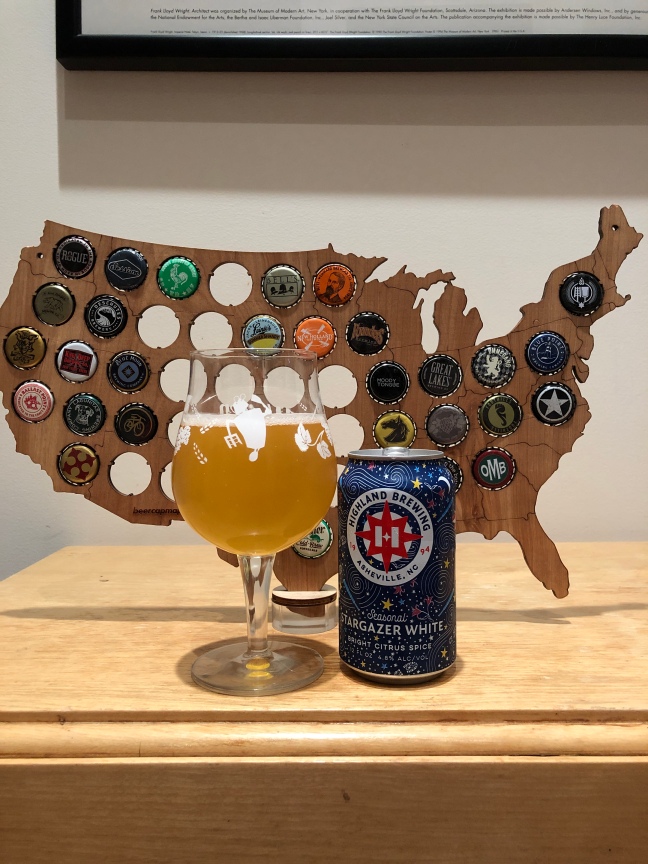 Highland Brewing, brewing since 1994, Stargazer White, 4.8% ABV from Asheville, North Carolina is a season Belgian White Ale brewed with grapefruit peel, and ginger and coriander and is a quite popular style of beer many other breweries brew the Belgian White style of beer. Stargazer White pours a yellow color a two finger bright white head that fizzles down to almost less than on finger giving off grapefruit and faint ginger with a slight spice note that leads you to a flavor of fruitiness with grapefruit and some orange notes with slight spiced ginger that is different for a white ale gives it a slight tropical feel with a slight grapefruit finish and more fruity grapefruit aftertaste with a light mouthfeel. I like my Belgian White to have a more fuller mouthfeel and this was on the light side and the ginger and grapefruit did quite meld together well but was kind of alright. I give Highland Brewing Stargazer White a D+. It was a different take on a White Ale that sounded alright but tasted not as good as it sounded, and wasn’t the worst Belgian Style White Ale I’ve had. The thin mouthfeel with the ginger and grapefruit peel did go well together in my opinion. I can tell what Highland brewing is going for with Stargazer White, it’s more of a summertime White Ale and I know it’s not summer now but that’s not why I didn’t like it. Stargazer White is not how I like white Ales. Cheers! Please enjoy responsibly!`