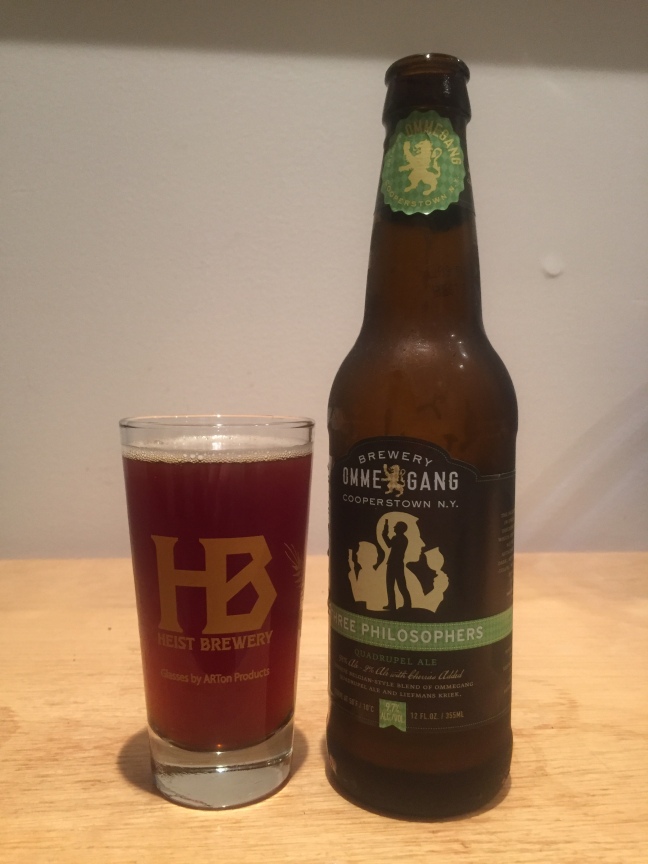 Belgian Ales are the best-tasting beers, in my opinion. I love them all each one of the different Belgian beer styles is great. Some I like more than others but that isn’t to say that others are bad. Brewery Ommegang in Cooperstown N.Y. is partly Belgian; they are part of the Duel family of fine ales. They brew Three Philosophers Quadrupel Ale, 9.7% ABV. Three Philosophers is a blend of Ommegang Quadrupel ale and Liefmans Kriek. So that is 98% Ale and 2% ale with cherries added. Three Philosophers pours a deep rich copper brown color with a beige two finger head that leaves nice lacing behind but not a lot of lacing. The aroma is sweet with candied sugar and dark fruits. Three Philosophers has a rather richer taste but none too rich, there is a nice sweetness with dark cherry and a hint of faint caramel. This is like most good Quads, and how one should be. But the taste and the flavors don’t wow me though. That might hold it back just a bit. The mouthfeel is more towards the fuller side but not overly full and Three Philosophers has a nice smooth sweet dark fruit finish and almost the same aftertaste but with a lingering raisin note. I think that is ale is pretty good, but I have had better. Don’t worry I am not saying that Three Philosophers is bad. I say that it is a B grade Belgian Quad. Yes, I have had better one brewed in Belgium, but those are the best in the world compare to this Ommegang, which is no slouch. I would recommend this one because it’s not as strong taste in the alcohol department, nor is it overly strong. I would have this again for those to reasons. So go try Ommegang Three Philosophers Quadrupel Ale. Cheers! Please enjoy responsibly!