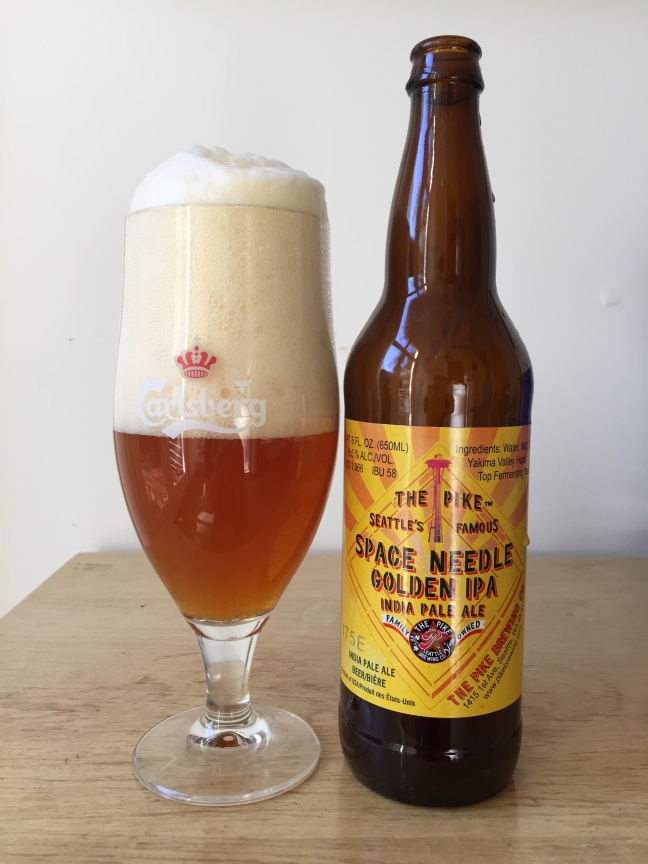 It is always great to have a beer at the source. Recently I visited Seattle and the Pike Brewery. I really enjoyed their beers. They are great. When I got back I thought to try some more of their beers and review them. So my father picked up this, The Pike Seattle’s Famous Space Needle Golden IPA, 6.5% ABV with IBU of 58. Space Needle doesn’t pour a golden color it pours more like a traditional IPA, a little murky orange color with a huge tower of bright fluffy white head that never seems to fade away. The aroma is with malts and earthy notes with hints of slight grassy features. The taste is slightly bitter up front with a more malted present in the middle and becomes a little more bitter on the end. This some similar in flavor to an English IPA with it malt profile. The mouthfeel is light to a slight medium and has a nice malted but bitter finish. The aftertaste is nice juicy touches of nice malted flavors and hints of an earthy note. Overall this was good but not what I was expecting, by still a good beer. So I say that The Pike Seattle’s Famous Space Needle Golden IPA is a B. I was going into this beer thinking it was going to be more lager or pilsner tasting that malty bitter IPA. Still, I thought it was good and yes I would have this again, and you should try it too. The fact that it read Golden IPA on the label and it did not taste like a golden beer was not good in my book but the flavor that I did taste was great. I really think that The Pike does a great job with their beer; I mean they have been doing since 1989. Cheers! Please enjoy responsibly!