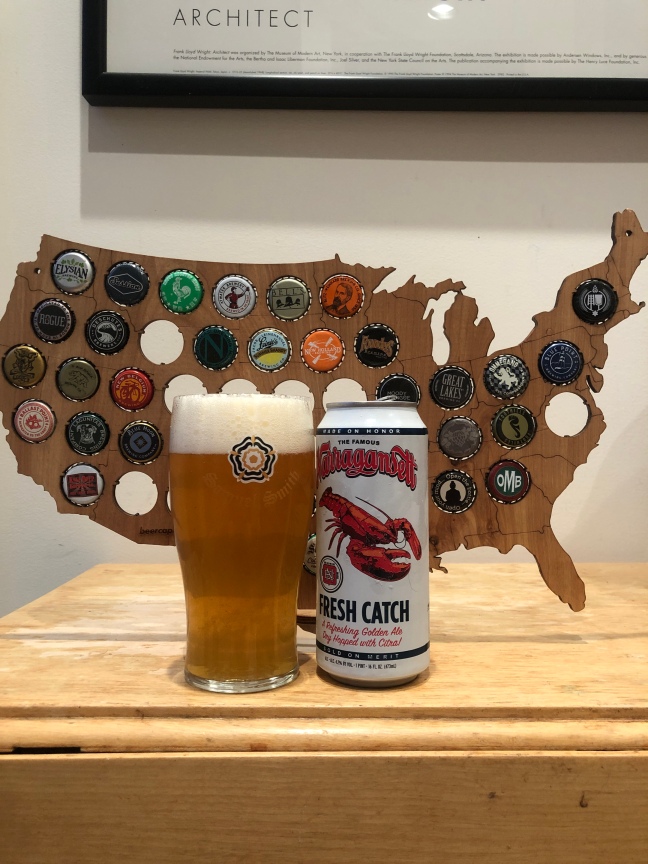 Narragansett Brewing Company Fresh Catch, 4.2% ABV is a golden ale dry-hopped with Citra hops in Pawtucket, Rhode Island which was founded way back in 1890 in Cranston Rhode Island. Narragansett is the best selling New England beer and has the ad slogan “Hi Neighbor, have a ‘Gasnett!” and in 2012 for Shark Week the had a slogan “Crush it like Quint” and “Honor the man, crush the can on social media. If you know Jaws then you know Robert Shaw as Captain Quint. Fresh Catch pours the slightest deep yellow with a bright two finger white head that fades really slow with thick lacing left in its wake that might hide a shark. You get a nice citrus fruit aroma with a nice dose of a bitter hop note and a faint lemony grapefruit. The aroma reminds me more of a light IPA. Take a swig and you’ll find yep   citrus fruit with a little faint biscuit note with a lemony bitter hop note that comes to a bitter crisp Citra finish that flows into a nice bitter citrus fruit aftertaste with a light mouthfeel. Narragansett Brewing Company Fresh Catch is a refreshing beer that I give an A-. Now I don’t think that more than three Fresh Catches can be consumed, after the third the flavor begins to become slightly too much. Its others a good beer and one that would pair well with shellfish, and a seafood boil. I recommend Narragansett Brewing Company Fresh Catch. Please enjoy responsibly! Cheers!