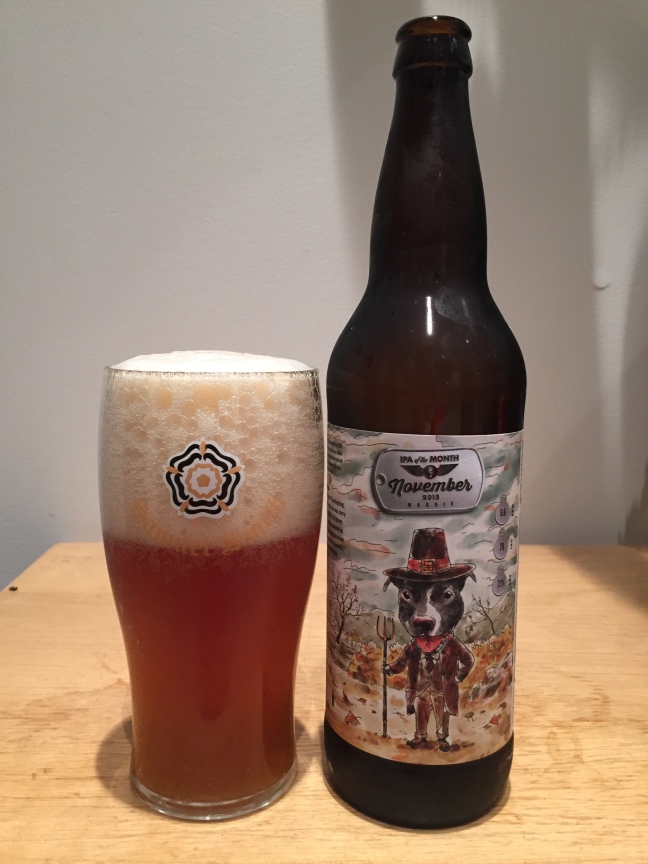 Its time again for Foothills Brewing IPA of the Month here we have November (Maddie), 7.1% ABV and 78 IBU. There is only one more month in the IPA of the Month then it will be Hop of The Month where they will showcase a different hop each month instead of a different IPA. This month IPA is brewed with a blend of Amarillo, Horizon, Chinook and experimental hops. Maddie pours a deep copper color with a four-finger bubbly yet fluffy off white head that slowly dissipates into some medium lacing around the glass. The aroma is a little more malt forward than past months IPA. You get a nice faint orange peel and hints of grassy grapefruit that leans on the earthy side. Maddie has sharp taste upfront with nice earth bready flavor surrounded by grassy and earthy yet slightly bitter fruity notes. The flavor was as wow as I was expecting it to be, but still good no less. The mouthfeel is medium with a nice bitter finish and an after taste of malted grass with hints of bitter citrus fruits. I didn’t find this to be bad; I just think that this Months IPA isn’t as good as the last couple of months. So I say this, Foothills IPA of the Month November, Maddie is a B. The balance between the hops and malts was slightly off which took this IPA down a notch. The level of bitterness was great on this though which kept it from being any worse. This month IPA does not change the fact that I love the entire series the Foothills has brewed I would have this again and do recommend trying it. So by all means go and try Foothills Brewing IPA of the Month November (Maddie) or any of the coming or previous months. Cheers! Please enjoy responsibly!